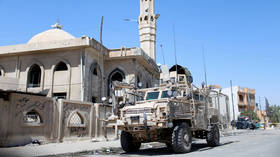 The Iraqi military confirmed earlier that multiple service members, including a US contractor and an Iraqi federal police officer, were wounded when “a number of missiles” struck a munitions storage facility in K1 military base on Friday evening.

According to one official, the rockets hit as a “major” mission was getting underway. K1 is located just northwest of Kirkuk, in northern Iraq.

ALSO ON RT.COMSix servicemen wounded after rockets hit base of Iraq military & US forcesNo group has claimed responsibility for the attack. However, while Islamic State (IS, formerly ISIS) terrorists are actively operating in the area using insurgency-style tactics, recent rocket attacks on bases housing American troops have been pinned without evidence on “Iranian proxies.”

Washington’s latest round of sanctions against Tehran came complete with an accusation of “weapons of mass destruction proliferation,” while Secretary of State Mike Pompeo several weeks ago threatened Iran with a “decisive US response” if attacks against American interests in Iraq continue.