Dozens of Turkish troops have been killed in Syrian government air raids, marking a dramatic escalation in the conflict between Ankara and Moscow-backed forces in northwestern Syria.

The 33 deaths followed an attack in Idlib late on Thursday and come as Syrian government forces, backed by Russian air power, are attempting to seize the last remaining territory held by Turkey-backed Syrian opposition forces.

The toll is the deadliest suffered by the Turkish army since it intervened in Syria in 2016 and is raising fears of a confrontation between Turkey and Russia on the battlefield.

Here are the latest updates:

One Turkish soldier was killed and two others wounded in a fresh round of artillery fire by the Russian-backed Syrian forces in northwestern Syria, according to Turkey’s defence ministry.

The defence ministry also said on Twitter that 19 military equipment, including eight tanks and four armoured combat vehicles, were destroyed.

1,323 people are talking about this

Turkey officials met with a Russian delegation in Ankara on Friday and said a sustainable ceasefire in Idlib region must be established immediately.

“We stressed to the Russian side the necessity of declaration of a sustainable truce, de-escalation [of the situation on the field], and withdrawal of the regime forces to the borders agreed in the Sochi deal,” Turkish Foreign Minister spokesman Hami Aksoy said in a statement.

The UN Security Council will hold an emergency meeting on Friday.

The meeting is expected to begin at 21:00 GMT, the acting chairman of the council, Belgian ambassador Marc Pecsteen de Buytswerve, told reporters.

He said the meeting has been requested by the United States, Germany, the United Kingdom, France, Belgium, Estonia, and the Dominican Republic.

UK Foreign Secretary Dominic Raab condemns the killing of Turkish soldiers in Idlib and said he will be calling for an emergency meeting of the United Nations Security Council.

“There is no justification for such blatant disregard of international law or basic human decency,” Raab said in a statement.

“Building on new sanctions announced earlier this month, we will work with our international partners to tighten this screw further until these crimes stop.”

France Foreign Minister Jean-Yves Le Drien declares his solidarity with Turkey and condemns the “repeated violations” of human rights by the Syrian government and Russia.

“I reiterated France’s call to the Syrian regime and to Russia to end the military offensive in the northwest of Syria, to fully respect their obligations under international humanitarian law and to return to the ceasefire arrangements of autumn 2018 to immediately end the hostilities,” said Le Drian in a statement said following a conversation with his Turkish counterpart Mevlut Cavasoglu. 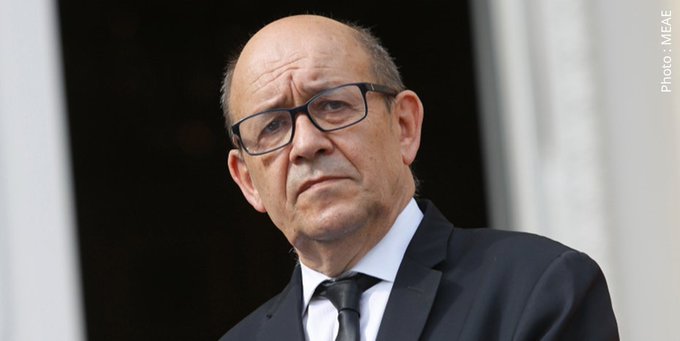 293 people are talking about this

I’m now handing over this blog to my colleague Virginia Pietromarchi in Doha, Qatar.

15:10 GMT – Greece will not ‘tolerate illegal entry’ of refugees and migrants

Kyriakos Mitsotakis, prime minister of Greece, says “significant numbers” of refugees and migrants are gathering at the land border between Greece and Turkey and are attempting to enter the country “illegally”.

In a post on Twitter, Mitsotakis is warning that Greece will not allow the illegal entry of refugees and migrants into the country. “We are increasing border security,” he added.

Significant numbers of migrants and refugees have gathered in large groups at the Greek-Turkish land border and have attempted to enter the country illegally. I want to be clear: no illegal entries into Greece will be tolerated. We are increasing our border security.

Greece does not bear any responsibility for the tragic events in Syria and will not suffer the consequences of decisions taken by others. I have informed the European Union of the situation.

1,991 people are talking about this

Local media in Turkey are posting videos and pictures of dozens of refugees and migrants in the country heading towards the border with Greece while one Athens-based newspaper is reporting that Greek border guards are using tear gas to deter some 500 people trying to enter the European country.

This comes after Turkey’s foreign ministry warned that refugees and migrants in the country are moving towards Europe because of the situation in Idlib. 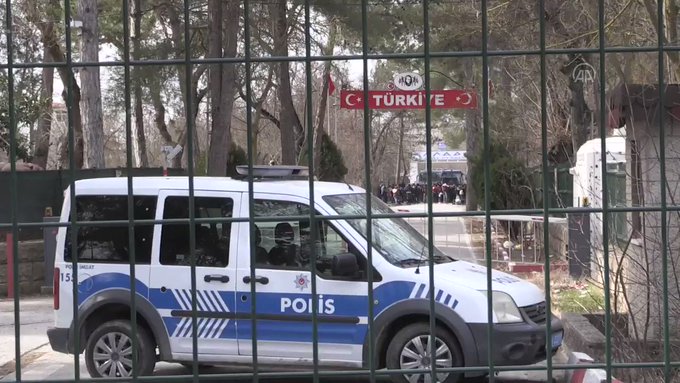 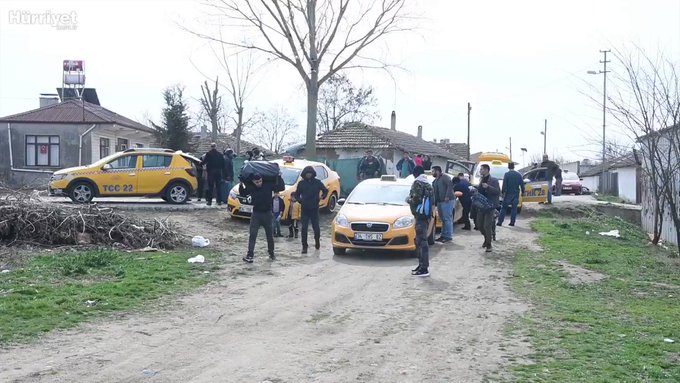 43 people are talking about this

Kathimerini, a Greek newspaper, said border guards at Evros made “deterrent use” of tear gas and that “this is the first time such a large group of migrants and refugees [have] attempted a crossing en masse at Evros”. 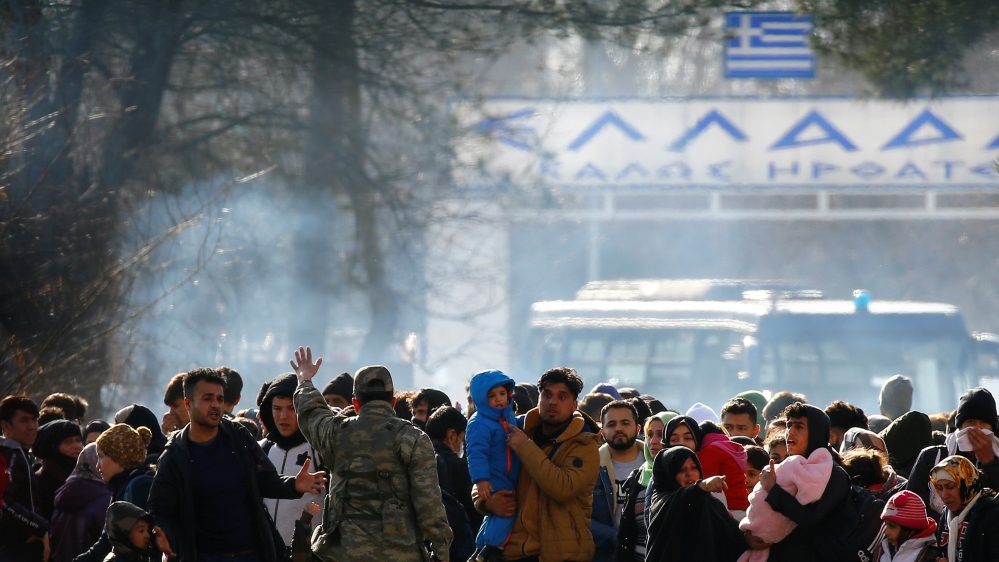 A picture taken from Pazarkule shows a group of migrants waiting on no man’s land between Turkey and Greece, at the Turkeys Pazarkule border crossing with Greece’s Kastanies, in Turkey, February 28, 2020 [Huseyin Aldemir/ Reuters]

Turkish President Recep Tayyip Erdogan’s phone call with his Russian counterpart, Vladimir Putin, on the situation in Idlib, earlier today indicates Ankara is seeking to avoid conflict with Moscow, according to an analyst.

“Any Turkish response against Russia will factor in the US and NATO’s responses. Unless Turkey gets a really strong commitment from the US and NATO – such as imposing a no-fly zone arrangement over Idlib – then its response towards Russia will be physically raising the cost of the war for Russia in terms of targeting Syrian regime forces, and making a distinction between the regime and Russia,” says Galip Dalay, fellow at the German Institute for International and Security Affairs.

“Turkey will continue to target the Syrian regime but will be very careful in terms of targeting Russia. Turkey will most likely increase its geographic scope when it comes to targeting Syrian regime forces beyond Idlib, which may expand to Aleppo and east of the Euphrates. But it will do so in a way that will not completely destroy its relations with Russia,” he tells Al Jazeera.

Bulgaria is ready to deploy 1,000 soldiers to its border with Turkey to prevent the entry of migrants into its territory, according to the country’s defence minister Krasimir Karakachanov.

Karakachanov, in a Facebook post, says the Bulgarian army “will take all necessary measures to protect” its borders.

Greece is also boosting patrols on its border with Turkey.

A statement from the Kremlin says the Russian and Turkish presidents, in a phone call earlier today, voiced “concern about the escalation of tension in Idlib” following the deaths of Turkish soldiers.

The conversation took place on Turkey’s initiative, the Kremlin says in a statement, adding: “Both sides reaffirmed that it was necessary to adopt additional measures in order to normalise the situation in northwestern Syria.”

Abdulla Hussein, a rescue worker with the Syrian White Helmets, says Syrian government air raids on Idlib’s second-largest city – Maaret al-Numan – are so severe his colleagues and medical relief groups are not able to access the area.

“The situation in Idlib is disastrous in every meaning of the word. The people there are running out of options. The Syrian government shelling, backed by Russian warplanes, has targeted even the main roads that the civilians are using to flee different towns and villages,” he tells Al Jazeera in Reyhanli, southern Turkey.

“The last two days,  with the advancement of Syrian forces towards Mount Zawiya area [a highland area that includes Maaret al-Numan], civilians there have left their villages and towns. Our teams and medical relief groups can’t even access the area due to the severity of the aerial bombardment there.”

Jens Stoltenberg, NATO’s secretary-general, is calling on Russia and Syria to stop the offensive in Idlib and to “fully engage in UN-led efforts for a peaceful political solution” to the conflict.

“This dangerous situation must be de-escalated.”

#NATO has just met in solidarity with our Ally Turkey, following the death of Turkish soldiers near Idlib. We condemn the indiscriminate air strikes by the Syrian regime & Russia. This dangerous situation must be de-escalated & humanitarian access allowed: https://bit.ly/2wbbSsM 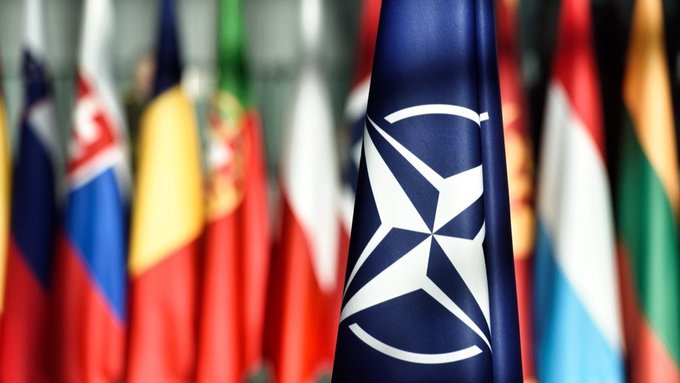 952 people are talking about this

The Turkish and Russian presidents discussed the situation in Idlib in a phone call, Interfax news agency says, quoting the Russian foreign minister.

“The conversation was detailed and focused on the need to fulfil the original agreements pertaining to the Idlib de-escalation area,” says Sergey Lavrov, adding that the two leaders are also looking into the possibility of a meeting in the near future.

Josep Borrell, the European Union’s foreign policy chief, is calling for an urgent end to the escalation in northwestern Syria, warning the tensions could slide into a “major open international military confrontation”.

“It is also causing unbearable humanitarian suffering and putting civilians in danger,” he says in a Twitter post. “EU calls on all sides dor rapid de-escalation and  regrets all loss of life.”

(1/2) #Idlib – Ongoing escalation around needs to stop urgently. There is a risk of sliding into a major open international military confrontation. It is also causing unbearable humanitarian suffering and putting civilians in danger.

146 people are talking about this

Hello, and welcome to Al Jazeera’s live coverage of the mounting tensions between Turkey and Syria in northwestern Idlib. I’m Zaheena Rasheed and I’m covering the latest developments from Doha, Qatar, and my colleague Linah Alsaafin is in Reyhanli, southern Turkey.