Eastern-based forces allied with renegade Libyan military commander Khalifa Haftar have sent thousands of foreign mercenaries to fight in a looming battle for the strategic city of Sirte.

Local sources from the city of Kufra, in southeastern Libya, told Al Jazeera that numerous convoys of foreign fighters on Sunday passed through the city Ajdabiya, which is located between Benghazi and Sirte.

Haftar-allied forces released a video showing military reinforcements being deployed from Benghazi, where the eastern forces are based, towards Sirte, 570km (354 miles) to the west.

The reinforcements included Sudanese and Chadian fighters, as well as more than 3,000 Russian mercenaries, sources said.

The UN-recognised Government of National Accord (GNA), led by Prime Minister Fayez al-Sarraj, announced it was determined to end “the occupation” of the cities of Sirte and Jufra by foreign fighters.

Sirte is the home town of former longtime leader Muammar Gaddafi and the last significant settlement before the traditional boundary between Libya’s west and east.

A GNA army spokesman said in a statement on Saturday that “Sirte was the most dangerous place in Libya after it became a focal point for mercenaries of the Russian Wagner company“, which he described as “criminal gangs”.

The “liberation” of Sirte and Jufra from Haftar’s soldiers had become “more urgent than ever”, he added.

On Saturday, Libya’s permanent representative to the United Nations called on the United States and the European Union to impose sanctions on those supporting armed groups in Libya. 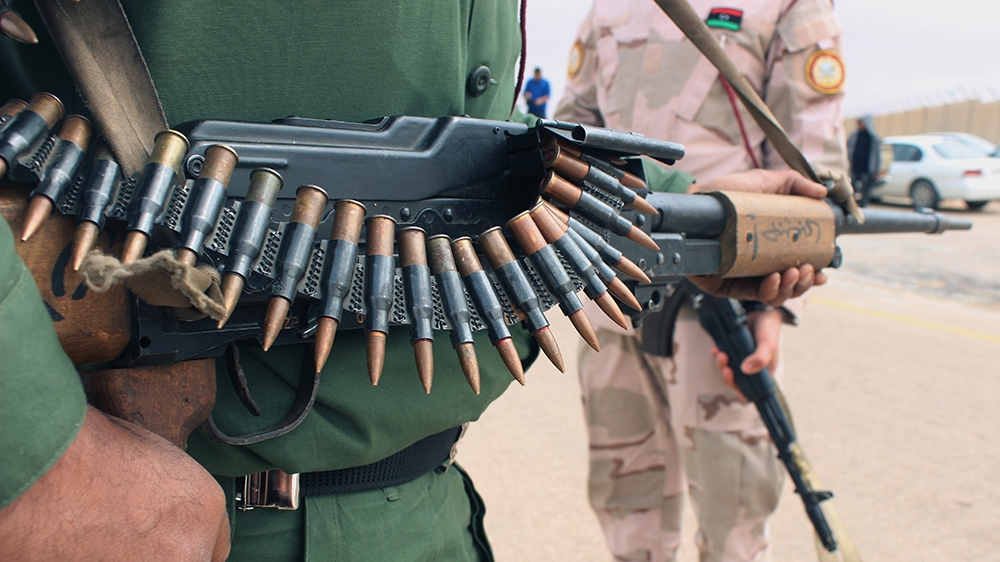 Meanwhile, nine more unidentified bodies were discovered in mass graves in the city of Tarhuna, an official said on Sunday.

Kamal al-Siwi, chairman of the Libyan General Authority for Research and Identification of Missing Persons, announced the total number of bodies discovered buried in the area had risen to 19 since search efforts began on June 5.

Tarhuna, 90km (56 miles) south of the capital Tripoli, was the last stronghold in western Libya controlled by militias loyal to Haftar before being recaptured in early June by GNA forces.

Earlier this month, the UN expressed “horror” after at least eight mass graves were discovered in Tarhuna.

In March, the UN said it received reports of hundreds of enforced disappearances, torture, killings and displacement of entire families in Tarhuna by Haftar fighters.

Libyan authorities announced earlier this month that international efforts were under way to establish a fact-finding committee to investigate violations by Haftar-allied groups, including the planting of land mines and digging of mass graves near the capital, Tripoli, and Tarhuna.

Libya, a major global oil producer, has been mired in turmoil since 2011, when Gaddafi was toppled and killed in a NATO-backed uprising.

It is now split between two rival administrations: the GNA in Tripoli and the eastern-based House of Representatives allied with Haftar.

The GNA is backed by Turkey while Haftar’s LNA is supported by the United Arab Emirates, Egypt and Russia.

In recent weeks, the GNA, with the support of Turkey, has made major military gains, forcing Haftar’s forces to retreat after regaining control over Tripoli and Tarhuna, in addition to other strategic locations, including the al-Watiya airbase.

The GNA has since launched a military operation to take the central coastal city of Sirte and Jufra further south.

The internationally recognised government in Tripoli has been under attack by Haftar’s forces since April 2019, with more than 1,000 people killed in the violence.